skip to main | skip to sidebar

CHECK OUT MY WILLY

I was fortunate enough, a few months back, to have a chance to work on Thurop Van Orman's Flapjack doing storyboard clean-up and revisions for them. It was the first gig I got off of doing a story-test, so the show holds a a special place in my heart. I'm so thankful Thurop gave me an opportunity to work for him, he's an awesome guy with the heart of a whale and the beard of a man whale. One of the first episodes I was given to clean-up was, last nights premier, 'WILLY'.  The episode was quite ambitious, a lot of action, a lot of singing, and... a lot of crowds.

Below; Original rough board and cleaned-up crowd/Willy 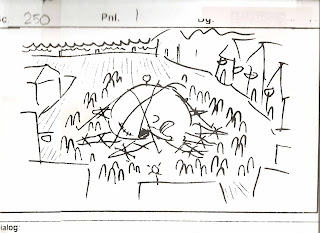 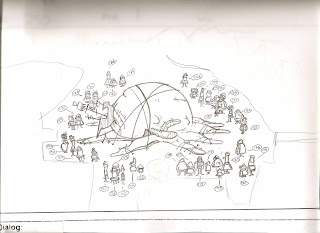 Below; Another cleaned-up crowd

Below; I think this is one of the first crowd shots I cleaned up. And it was great because I learnt how to draw every character in the entire Flapjack universe ever. I made photocopies of the colossal crowd at certain points along the way to track the progress,

EDIT; I realized the big crowd shot below wasn't actually from the episode 'Willy!', but a different episode I had been given to clean up. 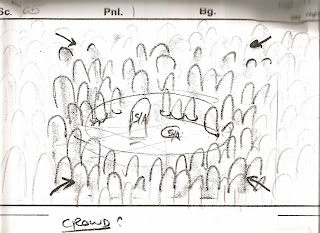 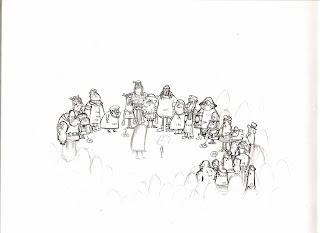 One of the great things about working clean-up on the show was forcing myself to draw in a new style. The shapes and proportions of the characters are really wacky, fun and exaggerated, they contain a lot of stylistic properties I'd never really explored. I think we all have certain formulas we instinctively stick to, whether we are aware of it or not, and working on Flapjack was a great way to push myself into new design territories. Thaddeus Couldron is the current character designer on the show, he's an incredible artist. 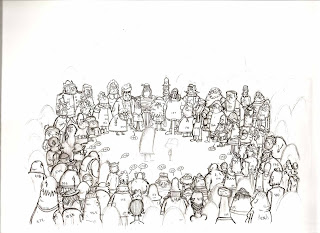 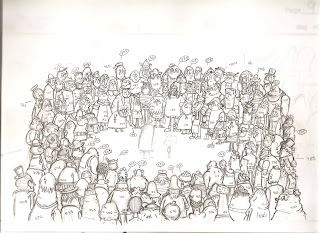 I'm not sure if this shot made it into the final episode? I don't have a tv, so didn't have a chance to catch the episode. They probably would've blown their entire budget on this one shot.

I also got my first TV screen credit 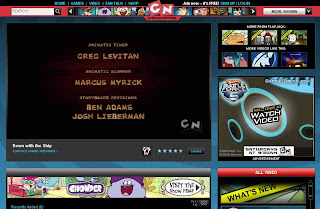 I did Manny and Khan before working on Flapjack, which would have technically made that my first screen credit, but who the heck knows when that things ever gonna air...

Got a lots goin on of late, so thought I'd post some of the recent stuff I've been up to.


Been doing a lot of writing lately, more on the philosophical side of things. Started a new blog dedicated more to the literary lines of labor. Just finished putting together a first collection of essays, one I'm in the process of having self-published. I've put it up on the blog free to download for anyone interested;

Still busy boarding, hard at work on Madagascar 3. Can't post any of the artwork I've done so far, but got this gem of a picture. Me and some of the board artists stayed late to work the other night, so production ordered diner for us. They put the order in my name. The guy delivered the food and below is a picture of the receipt; 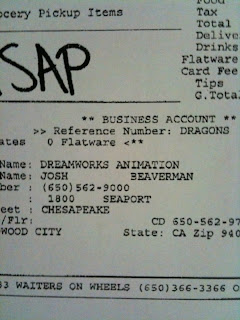 So that was awesome.

I now have a new nickname! By day I'm mild mannered Josh Beaverman, but by night... BEAVERMANNNNN! I'm also in the early stages of development on a new TV pilot with a major network, tentatively titled 'leave it to beaverman'.


I'm really dissapointed none of my friends came up with that when I was growing up. It's so obvious.

Also, now that a whole bunch of the cartoonstitute shorts leaked, I can finally post; 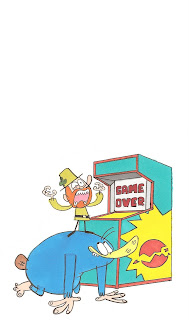 This was a little 'thank you' drawing I made for Derek Dryman. He really helped mentor me and Joey through the making of Manny and Khan, he's an awesome guy and super talented, have you seen Danger Planet!?


And check out the Danger Planet production blog if you havn't.

Posted by Josh 'Hat' Lieberman at 1:56 AM No comments:

The short I made for Cartoon Network with my good buddy Joey G leaked online again, and this time in high def!

By high def I don't mean the sound is so high you'll go deaf, that was the older leak.


Special shout out to the cartoon cavalry on Toonzone for all your support, you guys are the coolest. It means a lot to know that people who like cartoons like Manny & Khan.

Josh 'Hat' Lieberman
Burbank, CA, United States
My name is Josh, I'm 24, some people call me Hat. I dropped out of school and moved to California to pursue my dreams of writing and boarding for animation. I interned at Cartoon Network on Foster's Home for Imaginary Friends, and then at Dreamwork's on 'How to Train Your Dragon'. I recently completed a pilot for Cartoon Network called "The Awesome Chronicles of Manny and Khan" with my good friend Joey Giardina. I also got an opportunity to work on Cartoon Network's Flapjack doing storyboard revisions and clean-up. Now I'm back at Dreamworks doin storyboards for an upcoming animated feature. Animation is my life, it's all I've ever wanted to do... it's all I've ever actually done. I love animation history; Max Fleischer, Frank Tashlin, Michael Lah. I could watch Tex Avery shorts all day. My heroes are; Jason Mraz Tex Avery Craig McCracken Stephen Hillenburg and Ben Franklin